The compression ratio $K_0$ eof a Roots pump is typically between 5 and 70. To determine this ratio, we first consider the volume of gas pumped and the backflow by means of conductivity $C_R$, as well as the return flow of gas from the discharge chamber at pumping speed $S_R$:

In the case of laminar flow the conductance is significantly greater than the pumping speed of the backflow. This simplifies Formula 2-2 to

In the molecular flow range, the return gas flow $S_R \cdot p_v$ from the discharge side predominates and limits the compression ratio toward low pressure. Because of this effect, the use of Roots pumps is restricted to pressures $p_a$ of more than 10-4 hPa.

Roots pumps are equipped with overflow valves that allow maximum pressure differentials $\Delta p_d$ of between 30 and 60 hPa at the pumps. If a Roots pump is combined with a backing pump, a distinction must be made between pressure ranges with the overflow valve open ($S_1$) and closed ($S_2$).

Since gas throughput is the same in both pumps (Roots pump and backing pump), the following applies:

Let us now consider the special case of a Roots pump working against constant pressure (e. g. condenser mode). Formula 2-3 will apply in the high pressure range. Using the value $C_R$ in Formula 1 and disregarding the backflow $S_R$ against the conductance value $C_R$ we obtain:

At low pressures, $S_R$ from Formula 2-4 is used and we obtain

From Formula 2-6 , it can be seen that $S$ tends toward $S_0$ if the compression ratio $K_0$ is significantly greater than the ratio between the theoretical pumping speed of the Roots pump $S_0$ and the fore-vacuum pumping speed $S_V$.

Selecting the compression ratio, for example, as equal to 40 and the pumping speed of the Roots pump as 10 times greater than that of the backing pump, then we obtain $S$ = 0.816 $\cdot S_0$

Since the overflow valves are set to pressure differentials of around 50 hPa, virtually only the volume flow rate of the backing pump is effective for pressures of over 50 hPa. If large vessels are to be evacuated to 100 hPa within a given period of time, for example, an appropriately large backing pump must be selected.

Let us consider the example of a pumping station that should evacuate a vessel with a volume of 2 m³ to a pressure of 5 · 10-3 hPa in 10 minutes. To do this, we would select a backing pump that can evacuate the vessel to 50 hPa in 5 minutes. The following applies at a constant volume flow rate:

By rearranging Formula 2-9, we can calculate the required pumping speed:

Using the numerical values given above we obtain:

From the table below, we select the fore-vacuum pressures given in the column $p_v$, use the corresponding pumping speeds $S_V$ for the Hepta 100 from its pumping speed curve and calculate the throughput: $Q=S_V \cdot p_v$.

is calculated for an open overflow valve up to a fore- vacuum pressure of 56 hPa. $K_0$ for fore-vacuum pressures ≤ 153 hPa is taken from Figure 2.1. There are two ways to calculate the pumping speed of the Roots pump: 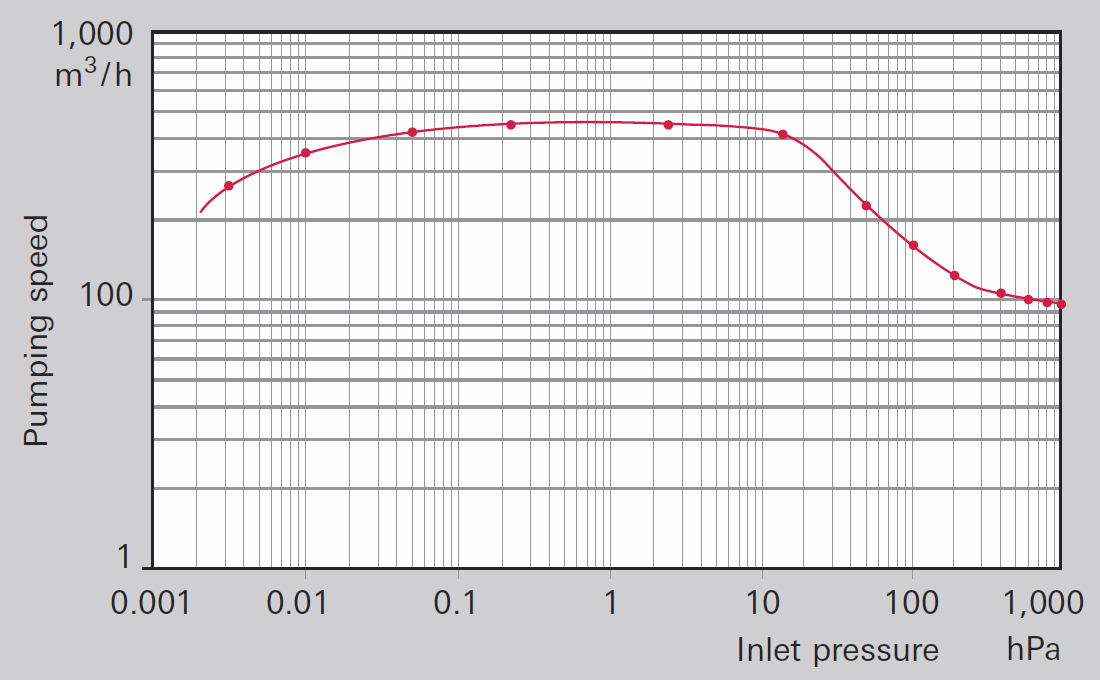 As the fore-vacuum pressure nears pressure differential $\Delta p_d$,$S_1$ will be greater than $S_2$. The lesser of the two pumping speeds will always be the correct one, which we will designate as $S$. The inlet pressure is obtained with the formula:

Figure 2.2 shows the pumping speed graph for this pumping station.

The pump-down time will additionally be influenced by the leakage rate of the vacuum system, the conductances of the piping and of vaporizing liquids that are present in the vacuum chamber, as well as by degassing of porous materials and contaminated walls. Some of these factors will be discussed in Sections 2.2.3.1 and 2.3. If any of the above-mentioned influences are unknown, it will be necessary to provide appropriate reserves in the pumping station.