7.2.1 Design of a leak detector with a mass spectrometer

The operating principle of quadrupole mass spectrometers is shown in chapter 6.1.2. These units are used both purely as residual gas analyzers or process gas analyzers as well as for leak detection. Inlet systems for analyzing gas mixtures at higher pressures, including for leak detection, are described in chapter 6.1.2.5. Gas analysis systems on the basis of quadrupole mass spectrometers can be used as multi-gas leak detectors.

The operating principle of sector mass spectrometers is shown in chapter 6.1.1.

The spectrometer cell of a leak detector shown in Figure 7.2 also only works at pressures under 10-4 hPa. In leak detectors, this pressure is generated and maintained by the pumping system of the leak detector. This does not require any operator intervention. 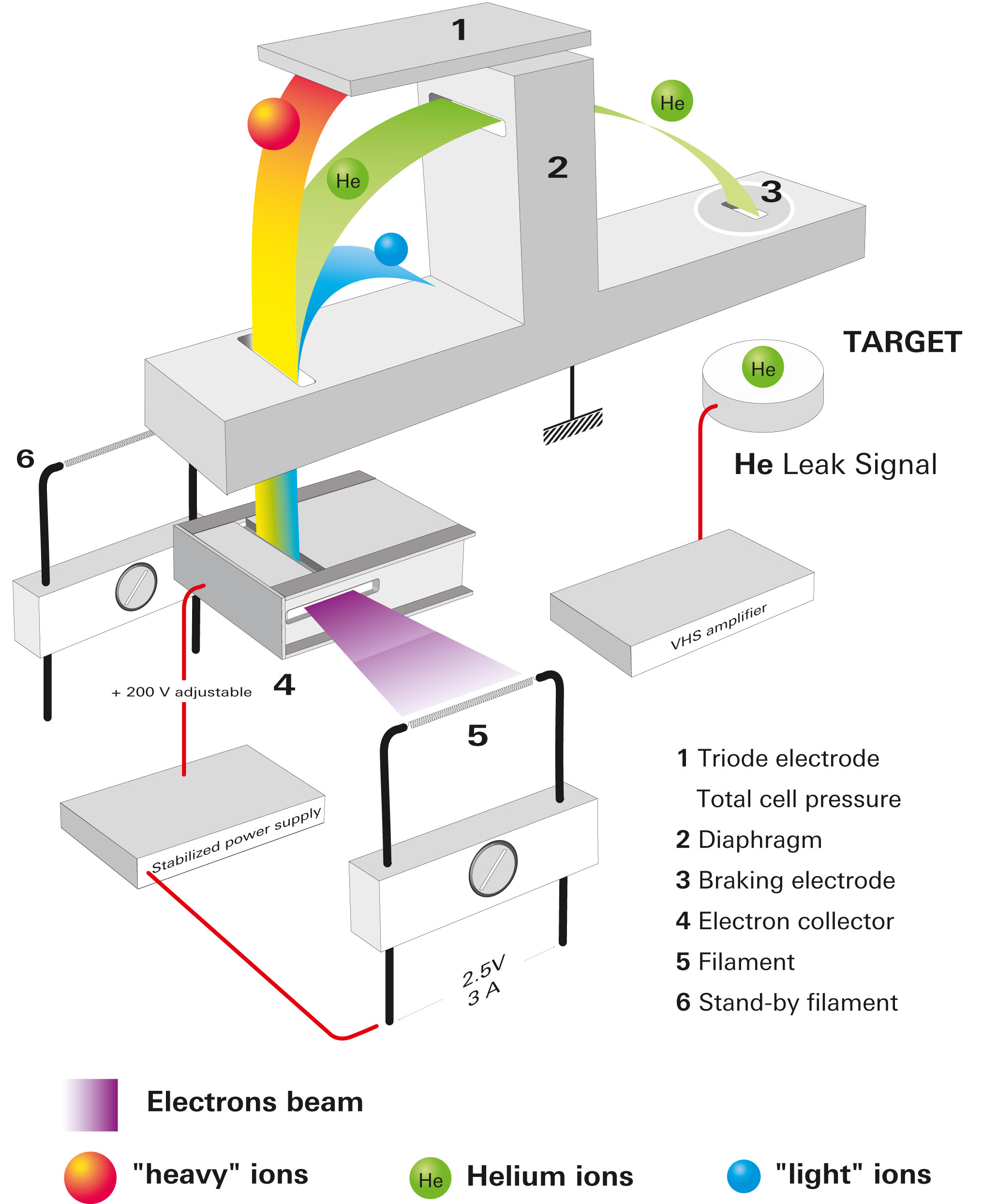 Leak detectors with mass spectrometric analyzers are designed as shown in the diagram in Figure 7.3. 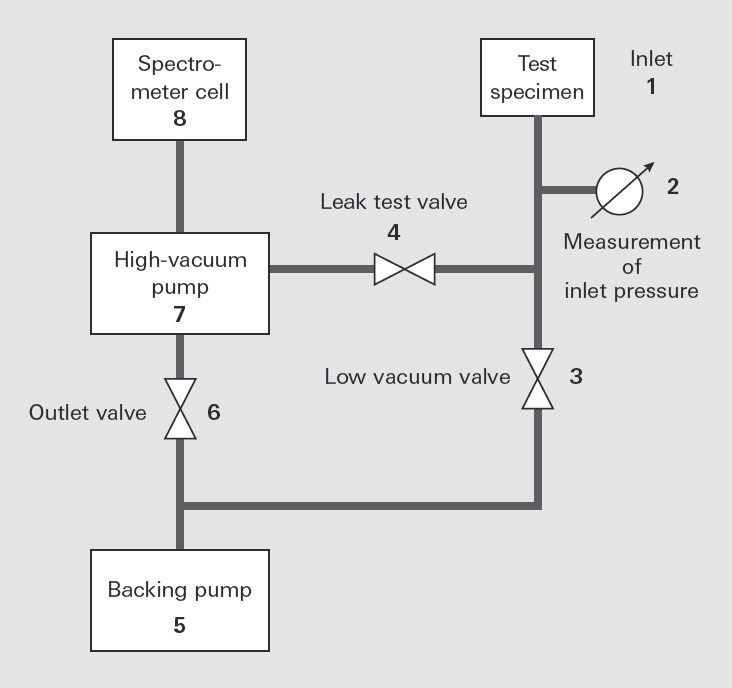 A mass spectrometer (spectrometer cell (8)) for masses 2, 3 and 4 (corresponding to test gases H2, 3He and 4He) is attached to the inlet flange of a turbopump (high vacuum pump (7)). A backing pump evacuates the turbopump through the exhaust valve (6). A test specimen (in DIN EN 1330-8 also referred to as “test object”) is evacuated through the inlet with the valve (3) open. Valves (6) and (3) are connected in such a manner that the required backing vacuum pressure of the turbopump always takes priority over evacuation of the test specimen. Once the test specimen has been evacuated, it can be connected to the backing vacuum or to the interstage pump of the turbopump via valve (4), depending on the pressure range concerned. Test gas is now sprayed onto the test specimen from the outside and together with the ambient air penetrates into the test specimen through leaks. The test gas present in the residual gas flows counter to the pumping direction through the turbopump via valves (3) and (6) to the spectrometer cell, where it is detected. The different compression ratios of the turbopump for air and the light test gas helium, which differ by multiple powers of ten, are utilized for this purpose.

While the high compression ratio of the turbopump keeps air away from the mass spectrometer, light gases arrive there at a relatively high partial pressure. The turbopump thus acts as a selective filter for helium and hydrogen. This is why a mass spectrometer enables helium and hydrogen to be detected in the test specimen even at pressures < 10 hPa (higher for some devices). Several powers of ten of the helium partial pressure, and thus a leakage rate range in the counterflow of between 1 and 10-9 Pa m3 s-1 can be covered by means of various interstage pumps in the high vacuum pump (4), as well as by operating it at different speeds that exponentially influence the compression ratio. A pressure in the range of several powers of 10-2 hPa must be attained in the test specimen and leak detector in the main flow for the highest sensitivity stage of the leak detector (intake via valve (4)).

Due to the upstream turbopump, the mass spectrometer always operates at an extremely low total pressure, and is thus well protected against contamination and failure.