The potential curve in a Pfeiffer Vacuum ion source is shown in Figure 6.20. The heated, electron-emitting cathode has a potential of approximately 20 V. The Wehnelt electrode is typically connected to the positive pole of the cathode and prevents electrons from being scattered in the vicinity of the ion source. An effective filament to anode potential V2 = 80 V of 80 V accelerates the electrons into the formation area (100 V), where they ionize incoming neutral gas molecules. The ions are accelerated through an orifice at a potential V5 = -150 V, and are again decelerated to V3 = 80 V by the focusing electrode. The injection orifice accelerates the ions once again before they enter the mass filter and are decelerated by the field axis potential V4 = 85 V at an energy of approximately 15 eV (difference between formation area and field axis). 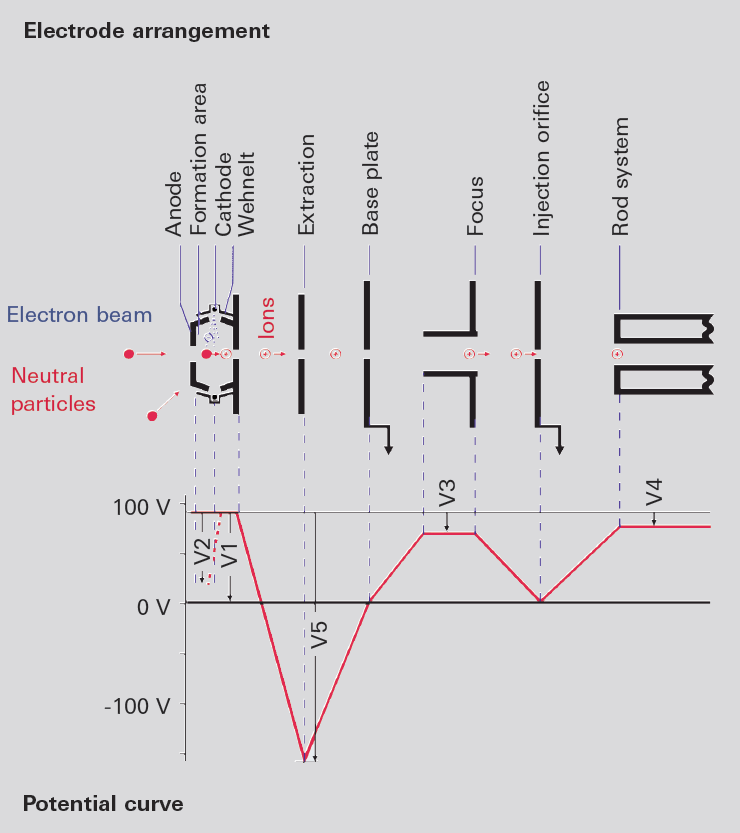 The Pfeiffer Vacuum PrismaPlus and HiQuad mass spectrometers are characterized by their electrically biased ion source as described above and their field axis technology.

In many quadrupole mass spectrometers, the cathode is grounded or even has a negative potential. The cathode (filament) accelerates the emitted electrons to the formation area (anode), where they ionize neutral gas particles, which are then extracted into the mass filter. Given these field conditions, however, electrons can also strike other surfaces in the vacuum, where they trigger EID (electron impact desorption) ions. This results in undesirable background noise and can cause considerable gas desorption when the filament is energized if there are highly-populated surfaces in the chamber.

Pfeiffer Vacuum ion sources have a positive potential (approximately 100 – 150 V). Electrons emitted from them are repelled from all surfaces having a lower potential (e.g. ground) and are thus kept away from these surfaces to avoid triggering interfering EID ions.

The ions formed in the ion source are accelerated toward the mass filter at high kinetic energy. As a result, the ions cannot be influenced by the peripheral or RF fringing fields, and initially move toward the mass filter at high energy. Ideal conditions for injecting ions into the quadrupole field are attained in this way, even without a pre-filter, unlike other mass spectrometers which require the use of a pre-filter. The mass filter, itself, is appropriately biased to the field axis voltage, which decelerates the ions again to a kinetic energy of approximately 15 eV upon entering the filter. This energy, dubbed field axis voltage, and the ion mass determine the velocity of the ions and thus their time of flight in the mass filter. The favorable injection conditions thus produced result in a high transmission of ions through the mass filter over a broad mass range, thereby resulting in the high sensitivity of the entire system.

An additional advantage of Pfeiffer Vacuum mass spectrometers is the arrangement of the secondary electron multiplier (SEM), which is offset by 90° relative to the filter axis (90 degrees off-axis SEM, Figure 6.21).

If the SEM is arranged in the axial direction behind the mass filter, all colliding particles (neutral particles, ions, electrons, photons) will generate secondary electrons and thus contribute to the background signal. To prevent this, the ions exiting from the filter are deflected by 90 degrees and then accelerated to the first dynode of the SEM. Neutral particles and photons are not deflected at all by the electrical deflection unit, and electrons are deflected to a much greater extent than ions. This means that almost all of the ions that are allowed through the filter will strike the SEM, which significantly improves the signal-to-noise ratio.

Apart from a very few special models, all HiQuad analyzers are equipped with this technology.

In the PrismaPlus, an axial C-SEM is offered as a current amplifier. In this case, too, the ions exiting the mass filter are deflected slightly toward the C-SEM, and are separated from the undesired particles.

The number of secondary electrons that are created for each of the ions striking the conversion dynode depends on the ion mass and energy and the type of ion (atomic or molecular ion). The conversion rate is a function of the mass. This effect is called mass discrimination, and is less pronounced with an SEM of discrete design than with a C-SEM. Mass discrimination can be reduced by accelerating the ions to a high energy before they strike the conversion dynode.

Both a stable RF supply as well as a mechanically precise filter are necessary in order to achieve maximum possible transmission over a broad mass range with a pre-selected mass resolution. A biased ion source with suitably selected field axis technology, as well as the “90 degrees off-axis” arrangement of the SEM considerably improve the signal-to-noise ratio. Mass discrimination in an SEM or a C-SEM can be reduced with the aid of a conversion dynode to which a high voltage is applied.

Quadrupole mass spectrometers differ from other designs through the following attributes:

With these advantages, the quadrupole mass spectrometer has become the most widely