Before gases can be analyzed in a mass filter, they must first be ionized in an ion source by means of electron bombardment (Figure 6.6). Electrons are emitted from an electrically heated cathode (filament). A voltage is applied between anode and cathode, which accelerates the electrons. Neutral gas molecules that are present in the formation space between the anode and cathode are ionized by collisions between electrons, forming single and multiple positive ions. The energy of the colliding electrons exerts a significant influence on both the number and type of ions that will be formed. 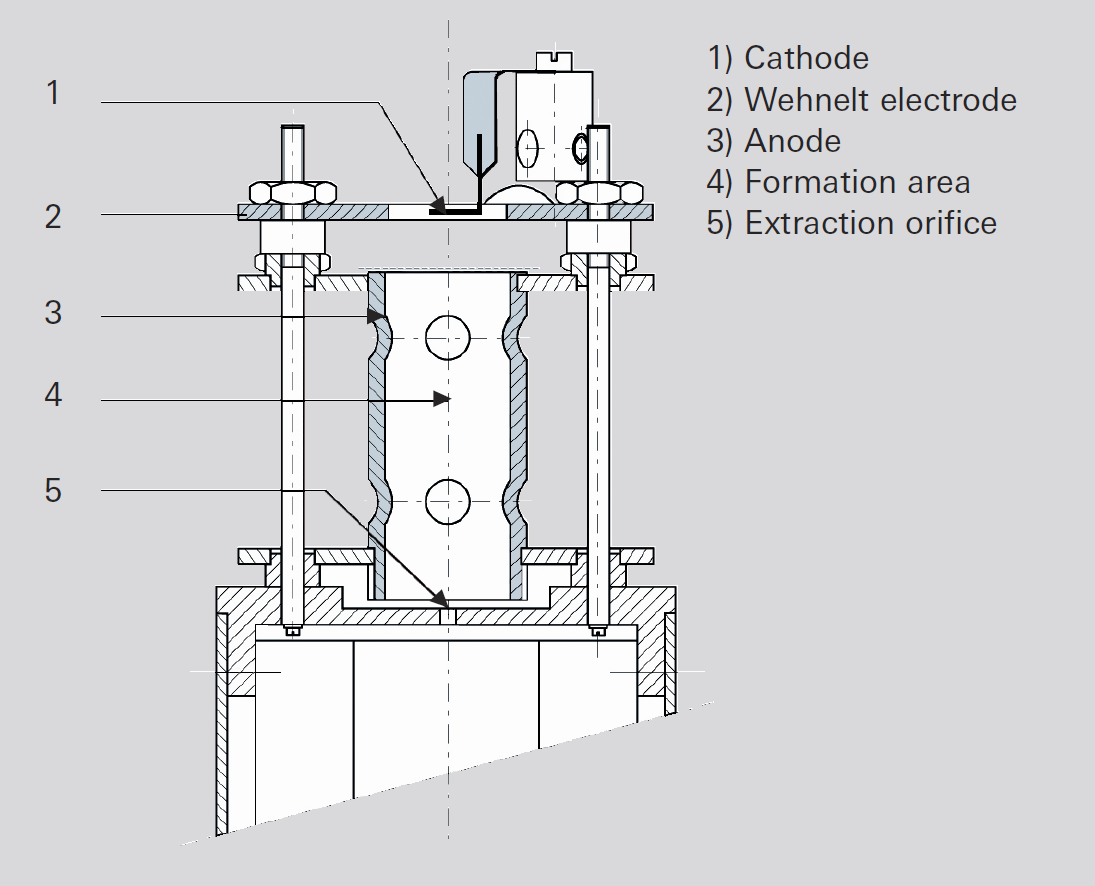 Ionization of the neutral particles commences at a minimum electron energy of between 10 and 30 eV (appearance potential). The number of formed ions quickly increases as electron energy rises (acceleration voltage), reaches a maximum at 50 to 150 eV depending upon the type of gas in question, and slowly declines again as energy continues to rise. Since the yield in ions, and thus the sensitivity of the mass spectrometer, should be as large as possible, electron energies between 70 and 100 eV are typically used. 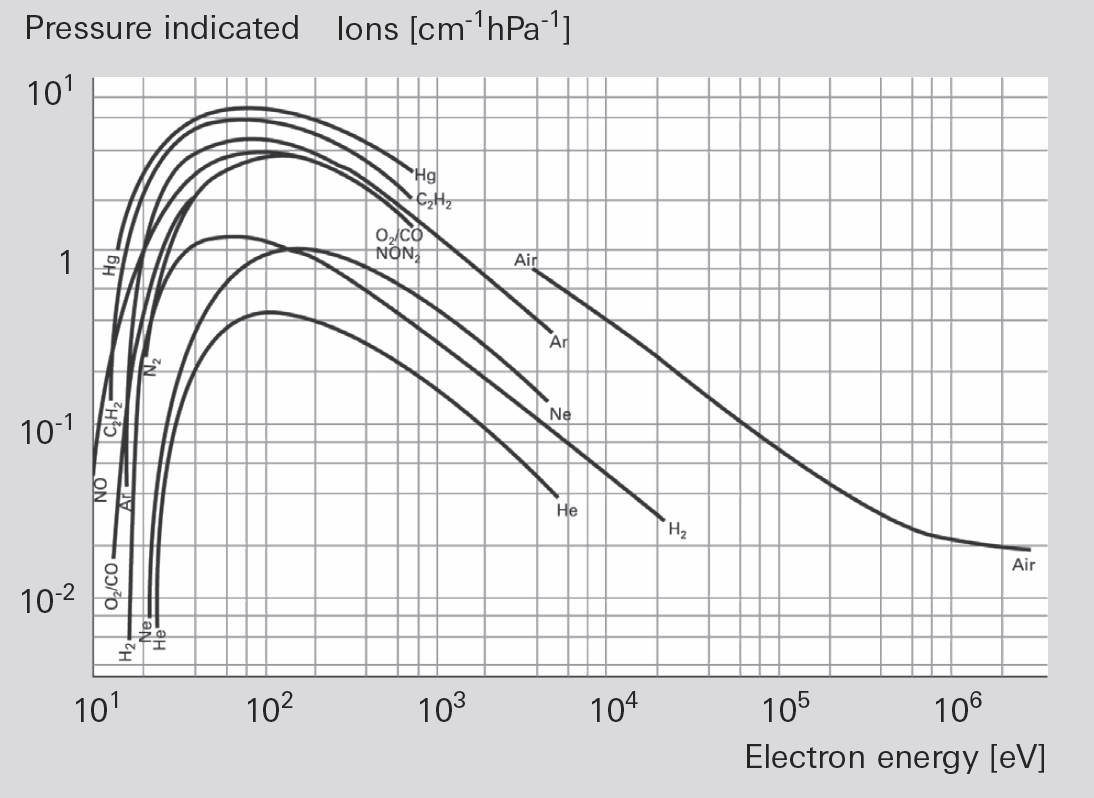 Figure 6.7: Ionization as a function of electron energy

The ion current $I_{K+}$ of a gas component K can be calculated from the following relationship:

In addition to these types, it is also possible for recombination ions, such as AC+, to form. The occurrence and relative frequency of individual types of ions are characteristic of a certain type of molecule and serve as an important aid in identifying the molecule, and thus as an aid in qualitative gas analysis. Figure 6.8 shows the fragment ion distribution (cracking pattern or fragment pattern) of the simple molecule CO2, recorded at 70 eV of electron energy.

Selection of the ion source and the optimal filament material is based upon the requirements imposed by the measurement task. Applications often impose contradictory requirements on the ion source. In order to achieve optimal results, the ion source must be matched to the task in hand. This has resulted in the development of different types of ion sources that can almost all be equipped with cathodes made of rhenium (Re), tungsten or yttriated iridium (Y2O3/Ir). 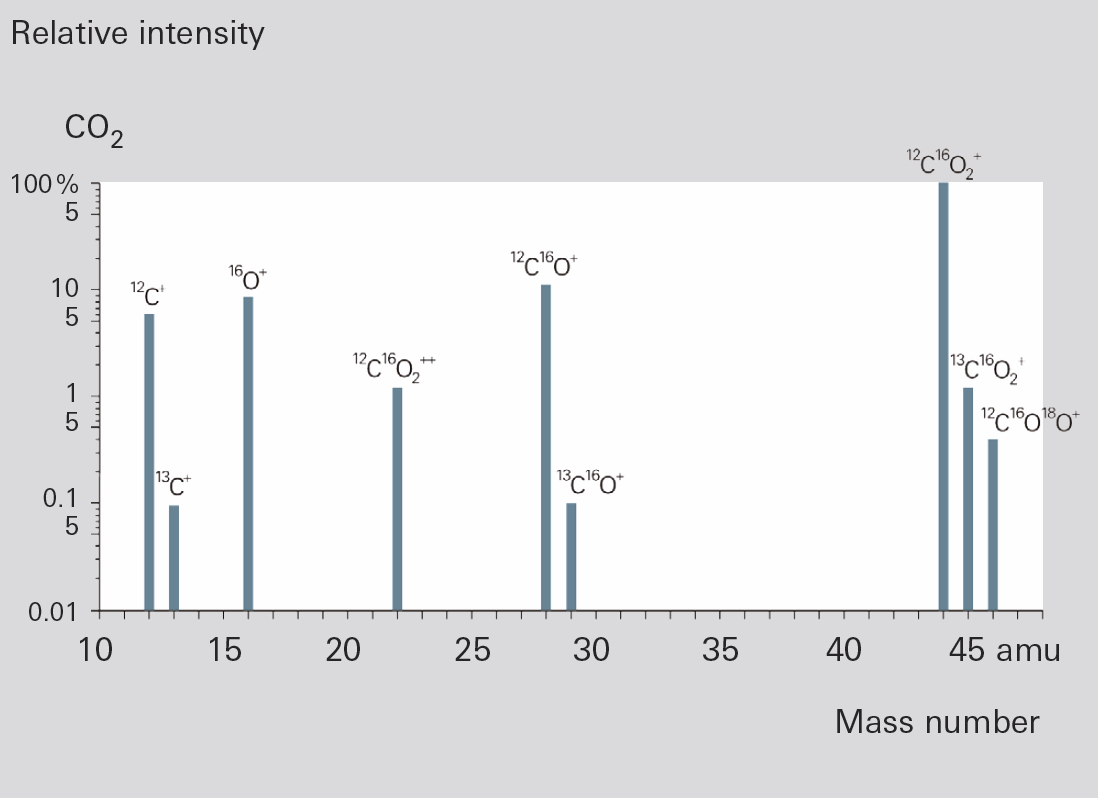 Table 6.1: Filament materials and their use

Tungsten (W) cathodes are preferred in the UHV range or where the vapor pressure of rhenium (Re) could have a disturbing effect. However the brittleness of tungsten cathodes due to the tungsten/carbon/oxygen cycle must be taken into account; i.e. due to the formation of W2C. Yttriated iridium is increasingly used today instead of the pure metal cathodes that were used in the past. The advantages offered by these cathodes are significantly lower operating temperature and relative insensitivity to air inrush. Consequently, the preferred fields of implementation for these cathodes are the analysis of temperature-sensitive substances, e.g. metal-organic compounds, or the analysis of contaminants in gas mixtures containing a high concentration of oxygen.

The various ion sources are described below on the basis of their attributes and fields of application. What all ion sources have in common is that they can be connected to a potential of up to 150 V. This avoids signal background due to EID ions ( EID = Electron Impact Desorption, also known as: ESD = Electron Stimulated Desorption). This technology will be explained in detail later.

This ion source is characterized by its extremely robust mechanical design and high sensitivity. It is primarily employed for residual gas analysis in high vacuum systems due to its open construction. Figure 6.6 shows a schematic diagram of an axial ion source. The cathode (1) is arranged within a hole in the Wehnelt electrode (2) and is connected with this electrode on one side. The electrons accelerated toward the anode (3) ionize gas molecules in the formation area (4). The positive ions reach the mass filter through the extraction orifice (5). Due to its relatively open construction, only minor falsification occurs through desorption and surface reactions. 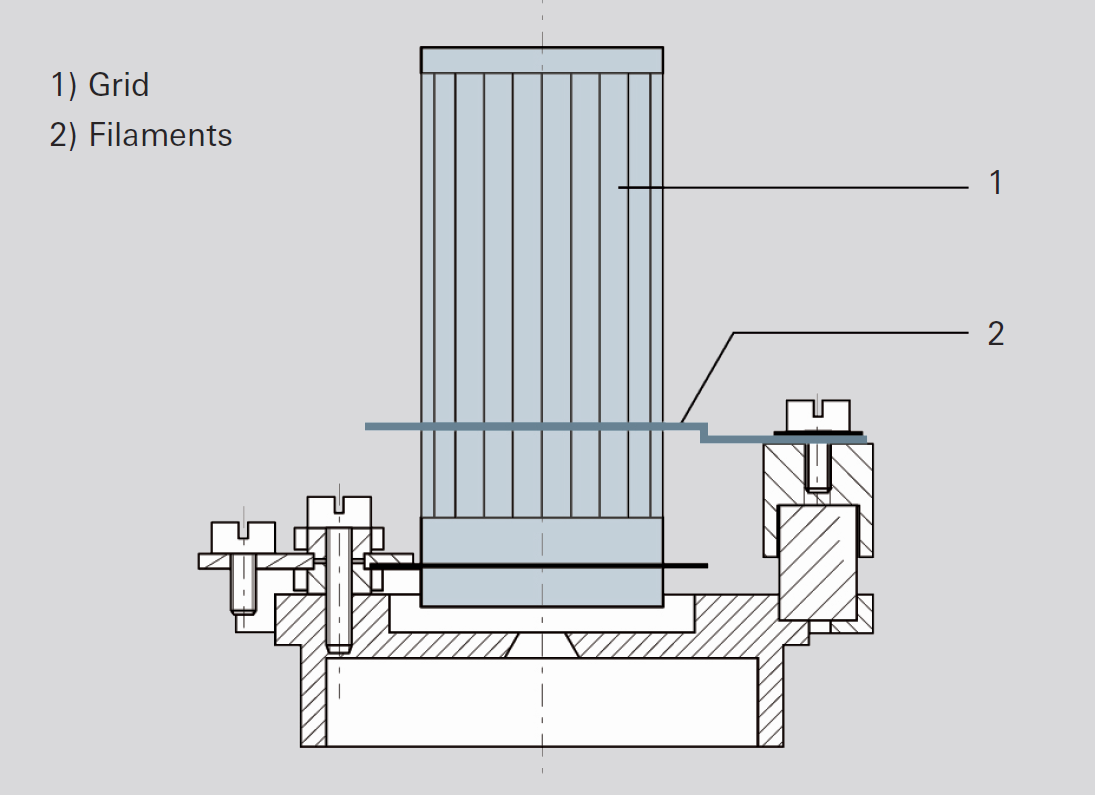 A grid ion source is used to examine residual gas in UHV or even XHV applications. Its extremely open construction and the choice of materials ensure very low internal gas emissions. This ion source is equipped with two tungsten filaments that can be heated simultaneously for degassing. If work is to be performed at pressures below 10-11 hPa, rod systems that have been highly degassed especially for this purpose should be used. Measurements in the pressure range below 10-10 hPa can be falsified by so-called EID (electron impact desorption) ions [32]. These (H+, O+, F+, Cl+) ions are directly desorbed by electron bombardment of surfaces, often with a high yield. EID ions come from adsorbed coatings that originate earlier in the history of the UHV equipment or the ion source, and usually have an initial energy of several eV. This attribute is utilized by careful selection of the field axis voltage to suppress the EID ions relative to ions from the gas phase with an energy of approximately 100 eV (Figure 6.10). 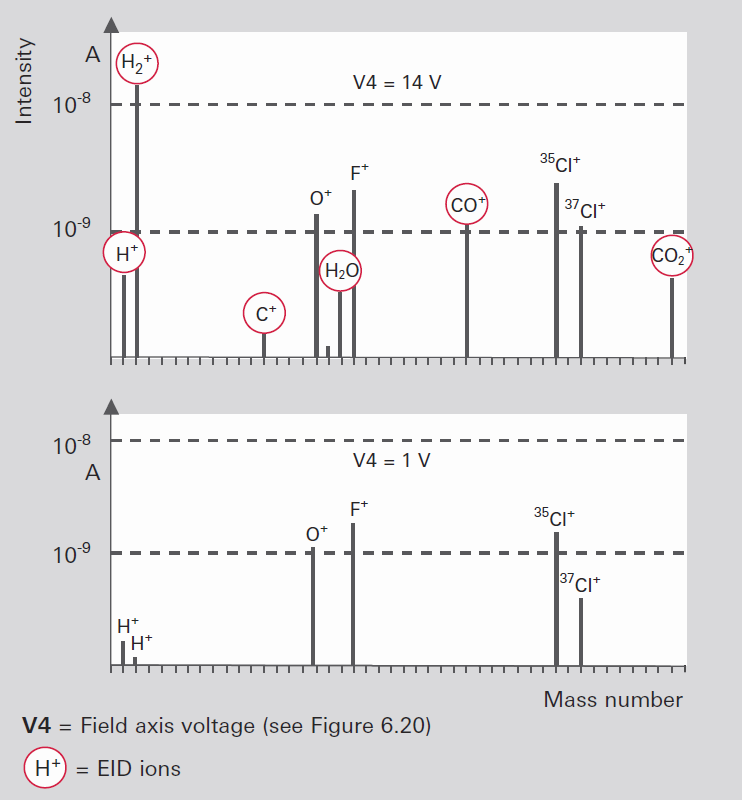 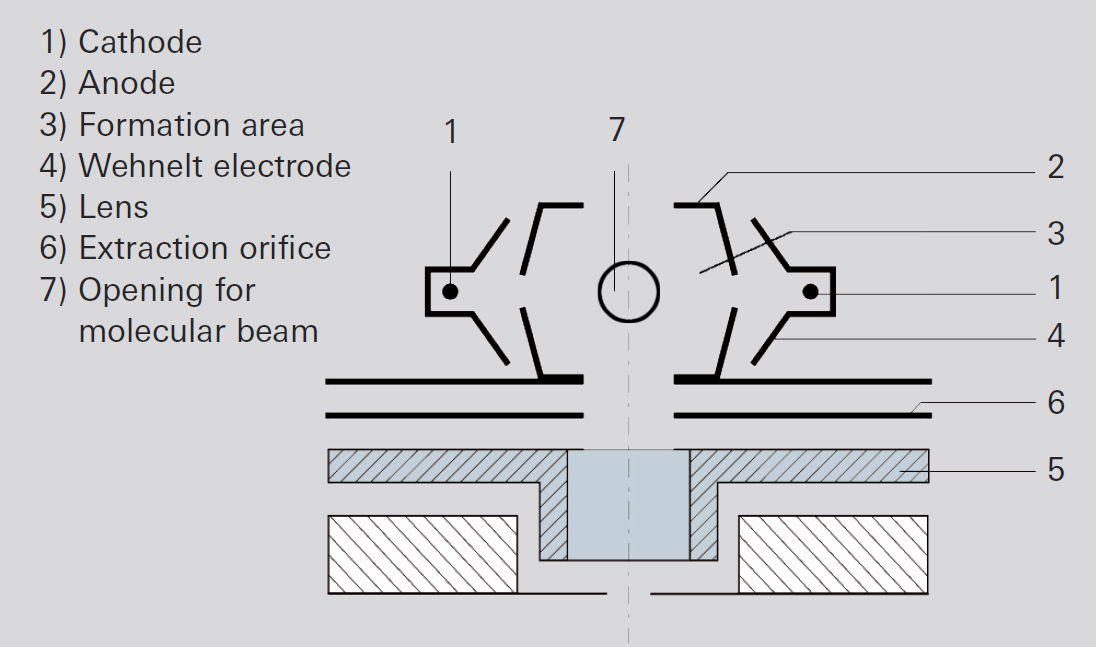 A crossbeam ion source (Figure 6.11) allows the direct passage of molecular beams perpendicular and parallel to the system axis. The system emits electrons with pre-selectable energy (0 – 120 eV) into the formation area (3), from either the left or the right filament (1). The Wehnelt cylinder (4) at filament potential prevents the electrons from scattering into the environment. Because the electron energy can be set within broad limits, this ion source can be used to determine the appearance potential. The crossbeam ion source very precisely maintains the entrance conditions of the ions into the mass filter. Crossbeam ion sources are used for diagnosing bundled molecular beams. In this process, the molecular beam is injected into the formation area perpendicular to the axis of the plane of projection (Figure 6.11). After passing through the ion source (7), non-ionized neutral gas molecules are either channeled into a pump or into a cold trap for condensation. Mass spectrometers with this type of ion source are also used as „rate meters“ for molecular beam epitaxy.

Some of the above-described ion sources are also available in gas-tight versions. Gas-tight ion sources are used if only small quantities of gas samples are available, or if the signal background generated by residual gas needs to be effectively suppressed. In this configuration, the gas inlet system (e.g. a heated capillary) and the ion source must be matched to one another. The inflowing gas volume will determine the pressure in the formation area, which can be a multiple of the pressure in the surrounding vacuum chamber, by means of the conductivity of the ion source. The operating principle will now be demonstrated using an axial ion source by way of example.

The gas to be analyzed is introduced directly into the formation area (4) via a metal capillary (6) that is at ground potential and an insulating tube (5). Insulation is provided by the washer (7). The conductivity to the vacuum chamber is approximately 1 l/s. 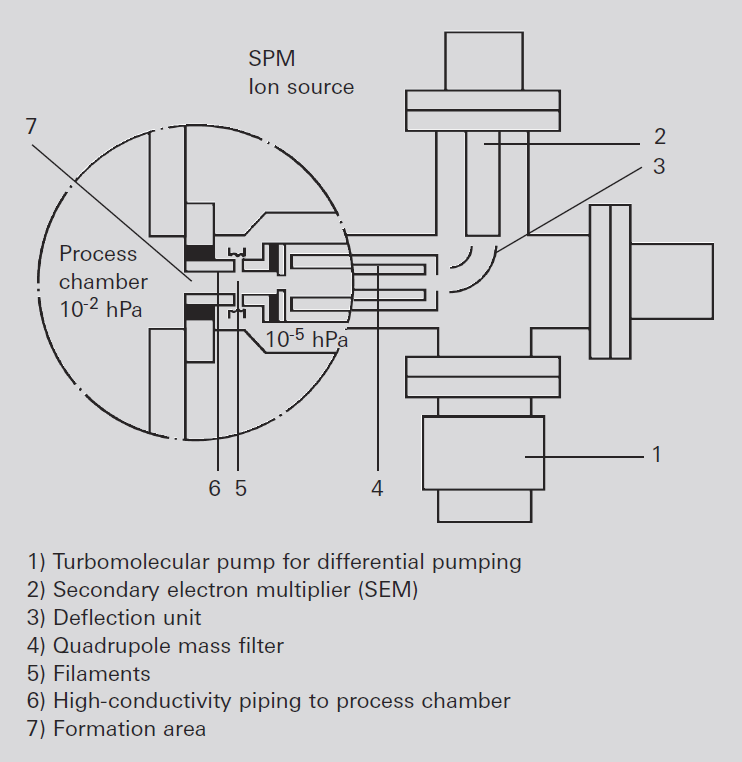 In this ion source, the formation area (7) is connected directly with the process chamber. The analyzer is equipped with a small turbopumping station (1), which also evacuates the cathode space (5) to approximately 10-5 hPa. Electrons are injected into the formation area (7) from the low pressure side through small holes in order to ionize the gas. The ions thus formed are extracted to the mass filter through a small opening to the low- pressure side. This ion source offers two crucial advan- tages for examining the composition of the gas in sputtering processes. On one hand, the analysis is per- formed at an ion source pressure that is up to three orders of magnitude higher; i.e. a higher process pressure can be tolerated in the vacuum chamber. On the other hand, the hot filament is not in direct contact with the sputtering process. This avoids contamination by the hot cathode during sensitive processes.

The PrismaPlus mass spectrometer from Pfeiffer Vacuum is equipped with this robust and highly sensitive ion source. It is an ion source that is especially suited for residual gas analysis. Its design is comparable to that of a grid source, with two cathodes, resulting in reliable operation. Both an open version as well as a gas-tight version with gas inlet in the axial direction are available. 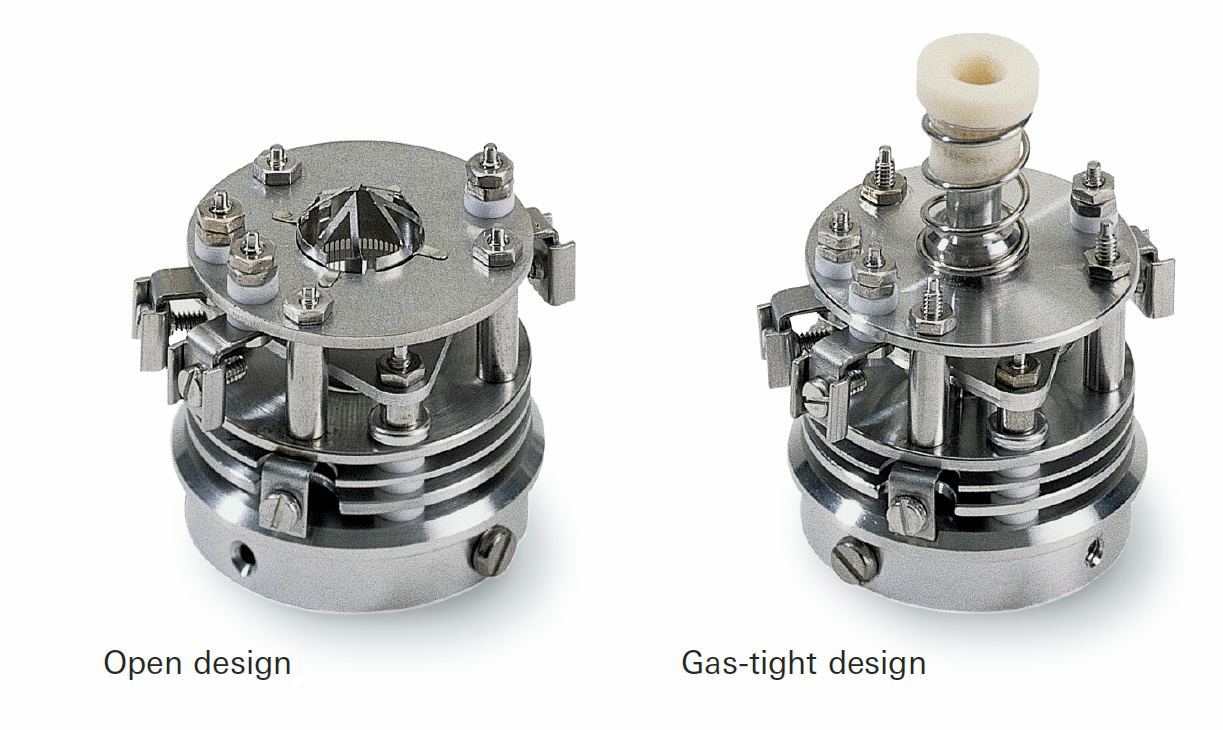 All ion sources described here ionize by means of electron impact. The ion sources can be categorized into two groups:

Closed ion sources are used in combination with a differentially pumped system (Figure 6.13) in order to analyze higher-pressure gases.