As the pressure decreases, an increasing amount of instrumentation is required to measure the reduced forces acting on the diaphragm. Other measuring principles which supply pressure information indirectly through measuring a gas property make it relatively easy to design vacuum gauges for the medium vacuum range. Vacuum gauges that work by defining the pressure are not realizable for high vacuum and ultra-high vacuum as the forces acting on the membrane are insufficient.

When considering indirect pressure measurement under vacuum it is a good idea to take the particle-number density as a starting point. According to the status equation that applies for an ideal gas: $p = n \cdot k \cdot T$ (Formula 1-8) this is proportional to the pressure at a constant temperature. The two phenomena used in vacuum technology for measuring pressure are the conduction of heat and electricity through the gas contained in the measuring area of the pressure gauge. Each gas particle has a share in the conductance and it is therefore easy to imagine that the density, and as a result, the pressure have a certain degree of influence on the conduction. Since gas atoms or molecules have different properties and in particular masses, pressure measurement based on this conductance phenomenon delivers readings that are dependent upon the type of gas.

A Pirani vacuum gauge utilizes the thermal conductivity of gases at pressures p of less than approx. 10 to 100 hPa. Wire (usually tungsten) that is tensioned concentrically within a tube is electrically heated to a constant temperature between 110°C and 130°C by passing a current through the wire. The surrounding gas dissipates the heat to the wall of the tube. In the molecular flow range, the thermal transfer is proportional to the molecular number density and thus to the pressure. If the temperature of the wire is kept constant, its heat output will be a function of pressure. However it will not be a linear function of pressure, as thermal conductivity via the suspension of the wire and thermal radiation will also influence the heat output. 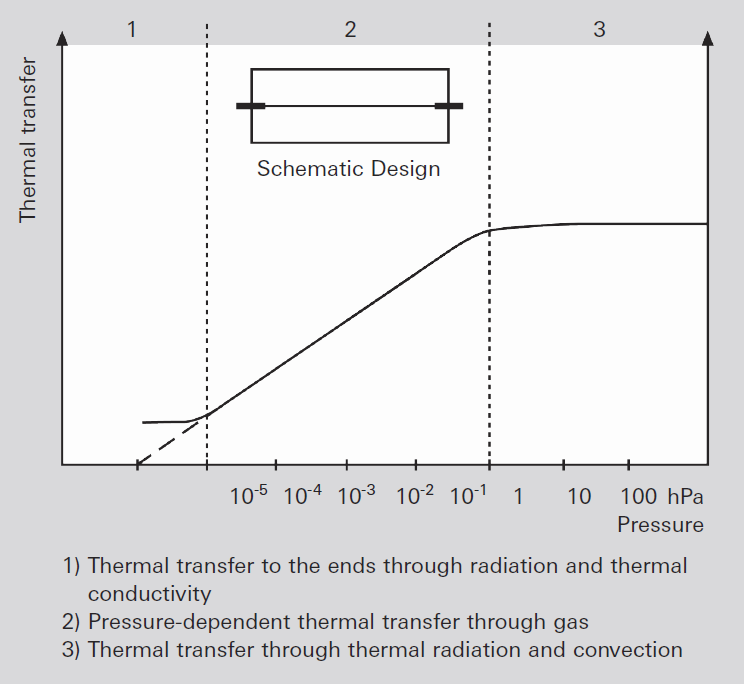 The limiting effects are:

Figure 5.4 shows the different curves for various gases between 10-4 hPa and atmospheric pressure. While good linearity can still be seen for nitrogen and air, significant deviations are indicated for light (He) and heavy gases (Ar). For Pirani vacuum gauges, correction factors are given in the operating manuals for converting the nitrogen equivalent pressure that is indicated into the correct pressure for the gas measured. These factors can be entered in the control and display devices which will then automatically indicate the correct converted pressure. This correction only applies for the linear portion of the characteristic curve shown in Figure 5.4. 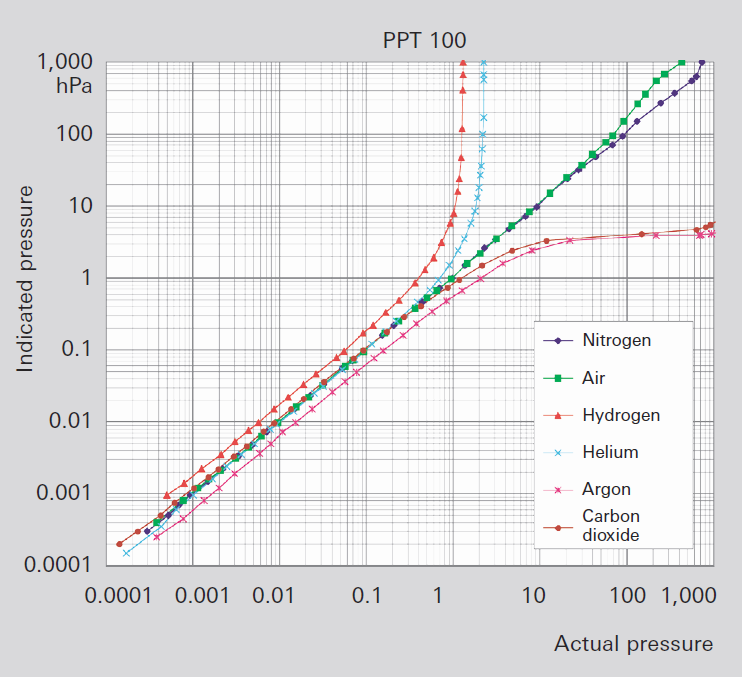 Cold cathode ionization vacuum gauges essentially consist of only two electrodes, a cathode and an anode, between which a high voltage is applied via a series resistor. Negatively charged electrons leave the cathode through field emission, moving at high velocity from the cathode toward the anode. As they travel this path, they ionize neutral gas molecules, which ignites a gas discharge. The measured gas discharge current (Figure 5.5) is a parameter for pressure. However only few molecules are ionized in the case of straight electron trajectories, which results in lower sensitivity and interruption of the gas discharge at approximately 1 hPa. A design that avoids this disadvantage is the Hobson and Redhead inverted magnetron [28]. A metal pin (anode) is surrounded by a rotationally symmetrical measurement chamber (cathode) (Figure 5.5). An axially magnetized cylindrical, permanent-magnet ring is placed on the exterior of the measurement chamber to generate a magnetic field within the chamber. Figure 5.5: Design of an inverted magnetron

The electrons travel through the magnetic field on spiral trajectories (Figure 5.6). The electron paths extended in this manner increase the probability of collisions with the gas molecules and ensure that sufficient ions are generated to maintain the gas discharge, even at pressures of less than 1 hPa. The pressure reading will depend upon the type of gas in question due to the different ionization probabilities of the various gases. For example, a lower pressure will be indicated for helium than for air. 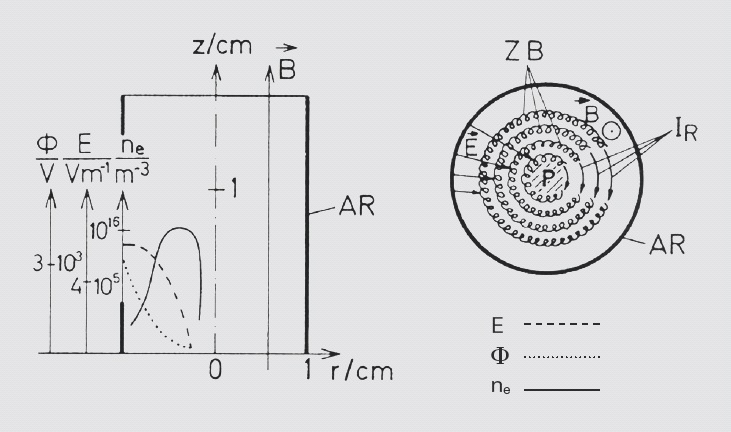 Cold cathode vacuum gauges can be easily contaminated under the following conditions:

Gases are also gettered on the surfaces of the cathode. This produces a pumping effect that will falsify the measurement signal.

When installing the gauge in a vacuum system, it is necessary to take the magnetic field into consideration, as it can interfere with sensitive equipment, particularly if they use electron or ion optics.

In this case electrons are generated with the aid of a heated cathode. Figure 5.7 shows the design of a gauge after Bayard–Alpert [27]. A thin wire is arranged in the middle of the cylindrical, lattice-shaped anode; this wire serves as the ion collector. A voltage of approximately 100 V is applied between anode and cathode. This accelerates all emitted electrons toward the anode. The emission current is measured in the anode circuit, which can be set by means of the heat output of the cathode. On their way to the anode electrons collide with gas molecules. The ions travel to the collector being at the same potential as the anode.

The measured collector current is a parameter for pressure. Since the emission current is proportional to the ion current, it can be used to set the sensitivity of the gauge. 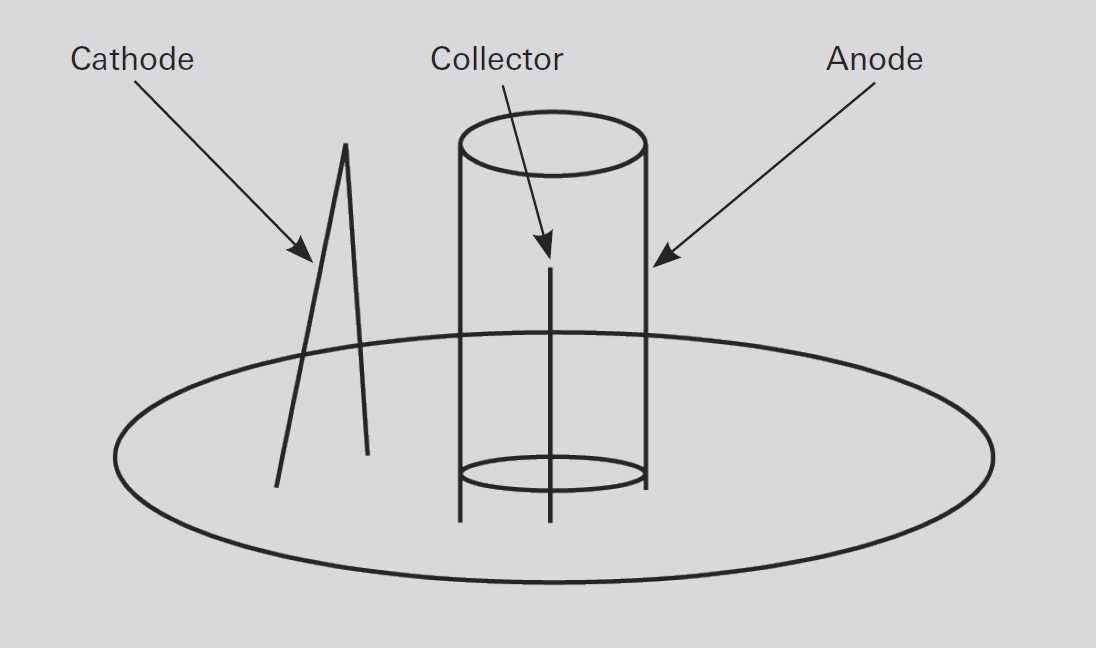 Pressures can be accurately measured to 1 · 10-10 hPa with Bayard-Alpert vacuum gauges. Measuring errors result from the pumping effect of the sensor, as well as from the following two limiting effects: