A global shortage of helium was predicted in 2013, following more than ten years of growth in the global demand for helium with a 5% average annual rate of growth, together with the prospect of resources in the USA becoming simultaneously depleted.1 This scenario did not materialize; in fact, helium demand stagnated in 2016 compared to 2015. Compared to 2011, consumption even declined by 1.7%.2 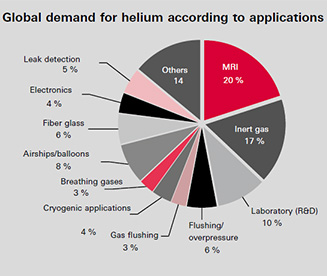 The helium supply chain is on the brink of a radical upheaval in the near future. Following a shortage of helium resources between the years 2011 and 2013, a phase of overproduction set in between the years 2014 and 20153 after the commissioning of the Qatar 2 natural gas field. A balance between supply and demand is forecast for 2016 and 2017.4 The helium market and so also the news about the raw material helium have long been dominated by the USA.

Against this backdrop, key regional agreements to ensure the supply of local markets such as South Africa5 or Europe6 often fall between the cracks. This is true for agreements such as the one signed between Praxair, Inc. and Polskie Górnictwo Naftowe i Gazownictwo SA (PGNiG) in June 2016. At its location in Odolanow, the PGNiG has the only helium-containing natural gas field in Europe with a global market share of some 1.7%.

As the major global supplier, the USA’s share of the overall global output of helium fell from about 2/3 in the year 2013 to about half in 2017. In comparison, Qatar, Algeria and Russia are recording a steep increase in production. Further examples of source countries are Poland, Australia and Canada, which however only contribute a small share towards the global market. The largest global domestic consumer, again the USA, will stop marketing the national Federal Helium Reserve managed by the Bureau of Land Management (BLM) on September 30, 2021. This date was laid down by US Congress in 2013 in what is known as the Helium Stewardship Act (HSA). This does not mean a clean break though, as certain contractually agreed projects will still be handled even after this date.7 Even after 2021, this reservoir will not be empty, but uncertainty prevails about the future ownership structure and the market behavior of the new owners (ibid.).