Design, equipment, fields of application: Many things have changed with quadrupole mass spectrometers (QMS) over the last 30 years. They have become more compact, durable, versatile and digital. Initially used primarily in research, QMS are nowadays utilized in the semiconductor industry, freeze-drying or leak detection, for example.

Historical review
The first quadrupole mass spectrometers on the market included an integrated control unit in a 19 inch rack connected via cable to the analyzer and other modules such as a high-frequency generator. Figure 1 shows the QMS 420 quadrupole control unit commonly used at the end of the 1980s. This device was operated either completely via the control unit by means of a four-line LCD display and the keyboard or via PC software. A serial interface (RS-232-C) was used for communication with the computer; the softkeys below the display were applied depending on the context. Analog or digital inputs and outputs could also be used via modules. The measured values could as well be displayed via a recorder or oscillograph channel.

The software available at that time consisted of different subprograms with which measurements could be performed and the QMS could be tuned. For example, to perform a measurement, a specific subprogram had to be opened. To access the stored measurement results later, one had to switch to another part of the software.

These first mass spectrometers were replaced in the beginning of the 1990s by compact QMS for mass ranges up to 300 u. In contrast to the older models, the electronics of the compact versions are located directly at the vacuum feedthrough of the analyzer. This eliminates the need for additional electronics installed in the rack. The electronics of a compact QMS usually do not require much more space than the analyzer. Compared to the QMS with rack electronics, the compact versions were moreover relatively cost-effective, but also limited in performance, especially regarding sensitivity, detection limit and measurement speed. 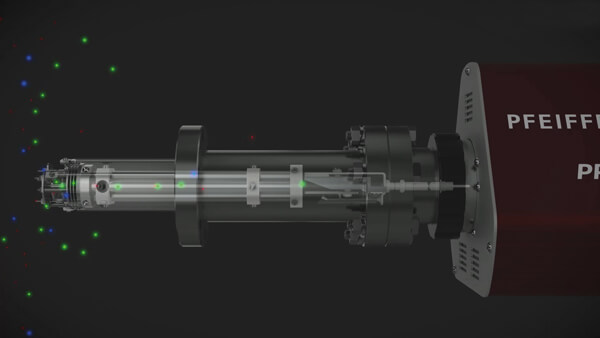 Figure: Inside the PrismaPro compact QMS from Pfeiffer Vacuum

Such devices are particularly suitable for simpler tasks such as residual gas analysis, leak detection or monitoring of specific masses over a certain period of time. To bake out the analyzer for UHV applications, however, the electronics must be removed.

Until the mid-2000s, most of the QMS available on the market were still equipped with a serial interface. The operation of several devices in a network and via one software – so-called "multiplexing" – was, for example, realized via ArcNet and fiber optic cables. Later, devices with RS-485, USB or Ethernet interface were developed for this purpose. Ethernet allows the integration of multiple QMS into an office or production network. Wireless communication via WLAN is of course possible as well.

Read more about this state of the art technology in the attached application report.

Should you have any further question, do not hesitate to contact us.