The quality and effectiveness of drugs significantly depends on their proper packaging: It needs to be unscathed and of the highest quality. Otherwise, serious consequences might occur. This was proven by a serious incident in the 1970´s: During this period, contaminated intravenous fluids packaged in glass bottles - which were typical at the time for packaging such dosage forms - caused an estimated 2,000 to 8,000 episodes of bloodstream infection, resulting in the deaths of about 10% of the patients. This severe package-integrity failure incident has triggered a heightened awareness of package integrity.

In the early 1980´s, aspects of container closure Integrity (CCI) were described. The physical and mechanical properties of a vial container/closure system, which affect seal integrity, were described and methods for testing the seal integrity proposed. These microbiological testing methods were adopted by many in the pharmaceutical industry and accepted by pharmaceutical regulatory agencies as an unofficial standard for verifying the integrity of sterile product-package systems.

In the 1990´s, an exhaustive listing of various physicochemical and microbiological challenge test methods useful for package-integrity testing was provided. The report also recommended validation of physico-chemical leak test methods by a direct comparison to a microbial ingress test.

Probabilistic versus deterministic test methods
Microbiological immersion challenge tests are probabilistic test methods. Such tests rely on a series of sequential and/or simultaneous events, each associated with random outcomes described by probability distributions. The findings are associated with uncertainties that necessitate large sample sizes and rigorous test condition controls in order to obtain meaningful results. Microbiological immersion challenge tests can be quite sensitive and are able to detect leakage pathways the size of a single microorganism. However, studies have also shown that such tests lack reliability, often missing leaks that could compromise product sterility. 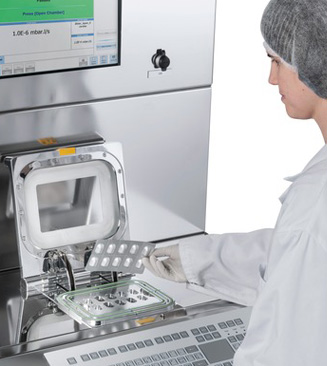