Producing energy the way the sun does

Energy production using nuclear fusion is becoming increasingly important in the search for clean alternative sources of energy. Since as early as the 1950s of the last century, scientists all over the world have been attempting to use nuclear fusion for peaceful purposes. This process works perfectly in the sun, after all. However, imitating the extreme conditions that prevail there is proving a hard nut for physicists and engineers to crack. Basically, it is a matter of fusing together two hydrogen isotopes at a time to form a new helium nucleus. In the course of this process, not just helium and a single neutron are formed but also an extraordinarily large amount of energy. This energy that is released is destined to be used to generate electricity: Just one gram of fuel can theoretically be used to generate 90,000 kilowatt hours of energy in a power plant. This is equivalent to the combustion heat of 11 metric tons of coal.

The challenge posed by research into fusion is getting the nuclei to fuse together. Since it is not feasible to replicate the sun’s own conditions for fusion in a power plant on Earth, this means that fusion can only take place under high vacuum at a high plasma temperature of some 100 to 150 million kelvin, and at in comparison a low particle density of 1020 per cubic meter. Following the heating up process, the nuclei separate from the electrons to form the plasma. The charged nuclei are guided through the reactor with the aid of an extremely strong magnetic field and kept away from the reactor walls. When two atomic nuclei approach each other or even collide, they fuse and release a large quantity of energy. A part of this energy in turn, ensures that the plasma remains at the same temperature and retains its state without any additional energy input. A positive energy balance is, of course, necessary if the aim is to produce energy for generating electricity. 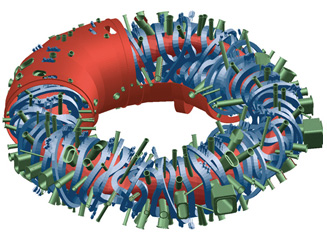 Demands placed on vacuum technology in the fusion reactor
Wendelstein 7-X essentially consists of two interlaced toroidal vacuum vessels. The external cryostat chamber contains the isolation vacuum and the cooling technology for the superconducting coils that are essential for generating the magnetic field. The inner chamber, or plasma vessel, is used to generate the actual plasma in a high vacuum environment.

An important factor for operating a fusion reactor is the existence of a strong, reliable, and powerful vacuum system. All vacuum components therefore had to pass a qualification procedure at the Max Planck Institute for Plasma Physics (IPP) to ensure their suitability for use in the fusion experiment.