The sun as a natural power plant

When solar energy for electricity generation is discussed, photovoltaic systems most often come to mind. However, concentrated solar power systems are gaining popularity as an interesting alternative. In these type of power plants, collector systems concentrate sunlight and collect it on an absorber pipe. A heat transfer fluid in these absorbers or receivers transports the energy to a turbine which is connected to an electrical power generator.
This type of power plant is installed in regions that offer high levels of direct sunlight irradiation, for example, in Spain, the US (California and Arizona), and North Africa (Morocco). More recent installations are spreading all over the world including facilities in India, Israel, the Arabian Peninsula, South Africa, Australia and China. 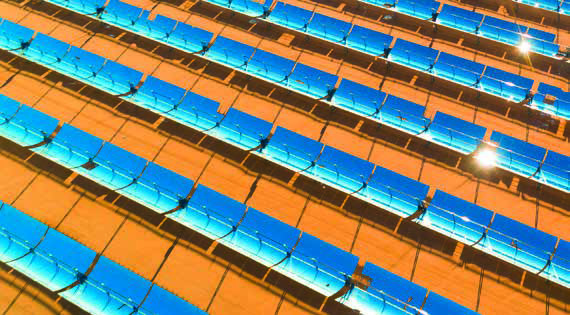 Various concentrator technologies are using parabolic troughs, solar power towers, Fresnel reflectors, and hybrid systems using both solar power and synthesis gas as an energy source. The majority of installations are using parabolic troughs. In a solar thermal parabolic trough power plant, parabolic shaped mirrors concentrate solar radiation in an absorber pipe, the so-called receiver, positioned at the focal point of the reflectors. A heat transfer fluid such as thermal oil or molten salts pass through the receiver (see figure 1). The receivers are connected in a series and lead the heat transfer fluid to the steam turbines in the system’s plant collector. Additional heat collectors in the plant can compensate for abrupt fluctuations in sun radiation and operation is also guaranteed during the night.

A solar thermal power plant with heat collectors can be planned as the energy production can be adapted to the consumption and/or the network load. The heat obtained in this way is pumped out and, by means of a heat exchanger, is used in a steam turbine for electricity generation. The parabolic trough technology has been proven and tested for many years and stands out due to a high degree of efficiency, high reliability and comparably low electricity generation costs.